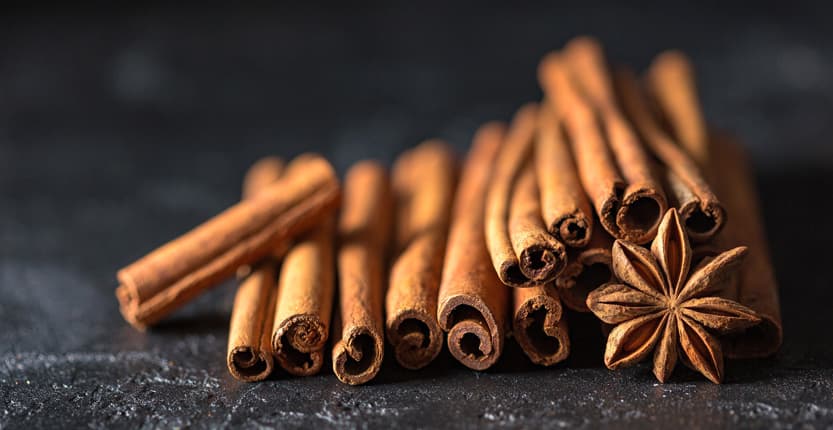 Cinnamon: Is it the spice of life?

The health benefits of cinnamon are many and varied, the bark of cinnamon has been used in traditional medicine for centuries. Research has shown that cinnamon bark may support healthy blood pressure levels already within a healthy range and may support healthy glucose metabolism (help maintain blood sugar levels already within a healthy range), may support the body in producing lower cholesterol levels, may reduce the body’s response to inflammation, and supports the body in fighting bacteria. But that’s just the beginning!

Is Cinnamon really that important?

Simply put, the more people learn about the most recent studies on the health benefits of Cinnamon, the more it will become a household supplement. It will literally become the next Turmeric (well, figuratively speaking of course). Recently many studies and clinical trials have explored cinnamon with regard to its interaction with Parkinson’s, diabetes, blood, and brain.

There is extensive research available on pubmed regarding Cinnamon’s antioxidant, anti-inflammatory, antilipemic (lipid lowering for cholesterol), antidiabetic, antimicrobial, and anticancer studies. Buckle up, because there will be much more to come on this fascinating spice due to the abundance of health benefits it offers. To sum it up in one word…remarkable.

Hi Antioxidant– Another study showed among 26 spices, cinnamon showed the highest antioxidant activity, indicating that it can be applied as an antioxidant used in foods.

Several studies have indicated the anti-inflammatory activities of cinnamon. Various compounds contained in Cinnamon showed anti-inflammatory effects by suppressing the expression of inducible nitric oxide synthesis production in the central nervous system. Cinnamon could be a potential source for the therapeutic treatment or prevention of inflammation-mediated neurodegenerative diseases.

Anti-Microbial – Some components of cinnamon are responsible for its anti-microbial activity. It can inhibit the growth of Listeria and Escherichia coli in food products thereby potentiating their shelf life. In one of the studies, the effect of cinnamon was studied against various organisms like bacteria such as Staphylococcus aureus, fungus-like (Aspergillus flavus, Mucor plumbeus and yeast species such as (Candida lipolytica). Plus, its combination along with clove oil has been effective against A flavus Biofilms- Another super interesting fact about cinnamon is its role in altering the expression of a gene icaA (which plays a role in the formation of biofilms).

Staphylococcus epidermidis is one of the leading causes of biofilms, which is similar to microorganisms that stick together and form a film in the body that can resist antibiotics and result in notorious nosocomial pathogens.

If you haven’t heard about the negative impacts of biofilms then please read our article on the topic. The literature on the effect of cinnamon on viruses is limited. However, it is said to inhibit protein synthesis which is responsible for is the ability to improve survival in mice following infection with influenza A/PR/8 virus.

Candida- One of the studies investigated the antimicrobial activity of Cinnamon against fluconazole-resistant Candida. They went ahead and experimented the effect of commercially available preparations in five HIV patients suffering from oral candidiasis. It was concluded that there was improvement in these patients, highlighting the need for further research on this aspect

Ok, this topic can get really confusing with a ton of very difficult to follow science (with words you wouldn’t even want to try to pronounce), so we’ll just do our best to provide the synopsis. Alzheimer’s disease is a progressive, neurodegenerative, and irreversible brain disorder with symptoms such as memory loss, confusion, impaired judgments, and loss of language skills.

Accumulation & Reduction of Alzheimer’s related Plaques – It is thought that accumulation of plaques [ß-amyloid protein] which form around brain neurons is a sign of Alzheimer’s. A study found that Cinnamon extract inhibits the formation of toxic Aβ oligomers and prevents the toxicity of Aβ on neuronal PC12 cells.

In another study, the oral administration of Cinnamon Extracts to an aggressive Alzheimer’s disease transgenic mice modeled to the reduction of plaques and improvement in cognitive behavior. The results showed that the use of natural compounds such as cinnamon can inhibit toxic oligomeric Aβ species formation in Alzheimer’s disease.

Inhibit Proteins linked to Memory Loss and Dementia – Scientists believe another protein found in the brain may be an early predictor of called “tau”.

It is linked to symptoms of memory loss and dementia in Alzheimer’s patients. Extracellular plaques (such as Aβ) and also intracellular neurofibrillary tangles of tau can cause the emergence of Alzheimer’s Disease. Preventing the tau aggregation may be a key factor in the development of new drugs. The effects of an aqueous extract of cinnamon

containing proanthocyanidins was examined on tau aggregation, and it was found that the extract of the whole cinnamon effectively inhibited the aggregation of human tau in vitro, and this could be attributed to the flavonoids in Cinnamon Extract proanthocyanidin timer and cinnamaldehyde.

Simply put, this stuff is great for keeping your mind healthy.

Increased learning ability- The study by neurological scientists at Rush University Medical Center found that feeding cinnamon to laboratory mice determined to have poor learning ability made the mice better learners. This would be one of the safest and the easiest approaches to convert poor learners to good learners,&quot; said Kalipada Pahan, PhD,

Improved Cognitive Function- A novel study evaluated the effect of lyophilized extract of Cinnamon bark on streptozocin-induced dementia in rodents. It was concluded that LCZE treated group performed better in the Morris water maze model and had improved discrimination between a familiar and a new object in case of object recognition test.

In one study, neurological scientists have found using cinnamon can reverse the biomechanical, cellular and anatomical changes that occur in the brains of mice with Parkinson’s disease.

In one study, an isolated polymer from cinnamon was observed to increase insulin-dependent glucose metabolism approximately 20-fold in vitro. Cinnamon is rich in polyphenolic components, and it was shown that an intake of 500 mg/d for 12 weeks decreased oxidative stress and improved impaired fasting glucose. Another finding also indicated that the consumption of 500 mg/d of cinnamon for a 12-week period significantly improved some metabolic syndromes such as fasting blood sugar, systolic blood pressure, and body composition, and because there is a relationship between metabolic syndrome and cardiovascular disease, these results can have an important effect for the improvement of public health.

Safdar et al explained this polymer made fat cells more responsive to insulin by activating the enzyme that causes insulin to bind to cells and inhibiting the enzyme that blocks the process that affects the insulin receptor, which is associated with increased insulin sensitivity.

Another advantage of the essential oil over antibiotics may be that bacteria do not develop resistance to essential oils. However, further study is needed to clarify the complex mode of action of cinnamon and its components against biofilms of S. epidermidis and other clinically relevant microbes.

Cinnamaldehyde, the main Cinnamon flavonoid has been shown to destroy bacteria membrane, inhibits the growth of fungi, including yeasts, filamentous molds, and dermatophytes, fungus on the hair skin and nails, as well as the eggs and adults of human head lice, Aqueous and alcohol extracts of cinnamon also have demonstrated antibacterial effects against H. pylor bacteria, which causes stomach ulcers. Stomach Cancer- In a pilot study cinnamon alcoholic extract reduced the Helicobacter pylori (H. pylori) levels, which is known to be responsible for conditions such as atrophic gastritis, duodenal ulcer, and gastric lymphomas. Though it was not completely effective in eradicating the H. pylori, it did decrease the colonization and suggested that in a concentration of 80 mg/day, it may be valuable for further research.

Tumor Cells- One animal study suggested that Cinnamon Bark can inhibit the survival, viability and even induce death of tumor cells without having a significant effect on the normal cells.

Melanoma cells -Extensive research has been done to see the effect of cinnamon on melanoma cells. It has been found to impede certain growth factors for melanoma tumor cell and simultaneously increase the activity of immune responses.

Coronary Artery Obstruction -A recent study reported the potential positive effects of two compounds isolated compounds from Cinnamon against coronary artery obstruction indicating that cinnamon also has the potential to be used to treat cardiovascular diseases.

Decreased Blood Pressure- Another compound in Cinnamon produces lowering of blood pressure effects, primarily in the arms and legs of dogs and guinea pigs. The vasodilatation induced by the Cinnamon compound in dogs lasted and remained over the recovery period of the fall in blood pressure to the baseline.

Blood Vessels- Another study in rats showed that compounds in Cinnamon also expanded the wall of blood vessels in an endothelium-independent manner. Cinnamon also may reduce the progress of hypertension in types 1 and 2 diabetes by abridging vascular contractility, in addition to its insulinotropic effect in insulin deficiency.

So, How do I Choose What Cinnamon to Take?

When looking for a Cinnamon Supplement which one should you choose??

Cinnamon is not well absorbed by the body and is not readily water-soluble. Cinnamon only has a bioavailability of roughly 50-62%, Watwater-solublennamon has been studied and shown to be more effective than other forms.

Make sure you chose the right high-bioavailability supplement in liposomal form and if possible with a Cyclodextrin complex to enhance solubility: one that boost’s bioavailability so your body can get the most out of the active compounds in Cinnamon.

How to choose the Best Probiotic for your own digestive health

12 Amazing Black Seed Oil Uses That Can Improve Your Health